The Sweetness at the Bottom of the Pie - Alan Bradley

The Sweetness at the Bottom of the Pie

is another “quick read” borrowed on impulse from my Library which I picked up when I went in to collect the first Mistborn book. I faintly remembered reading a positive review of this book somewhereFor very-nearly-eleven-year-old Flavia de Luce, 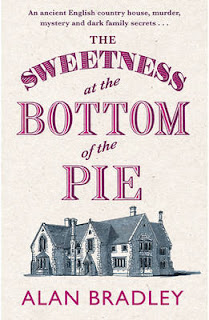 the discovery of a dead snipe on the doorstep of Buckshaw, the crumbling de Luce country seat, was a marvellous mystery - especially since this particular snipe had a rather rare stamp neatly impaled on its beak. Even more astonishing was the effect of the dead bird on her stamp-collector father, who appeared to be genuinely frightened. Soon Flavia discovers something even more shocking in the cucumber patch and it's clear that the snipe was a bird of very ill omen indeed.

As the police descend on Buckshaw, Flavia decides it is up to her to piece together the clues and solve the puzzle. Who was the man she heard her father arguing with? What was the snipe doing in England at all? Who or what is the Ulster Avenger? And, most peculiar of all, who took a slice of Mrs Mullet's unspeakable custard pie that had been cooling by the window...?
When I searched my blog roll to work out where I'd heard of the book from I realised that Carl had listed it as one of his books of the 2000s and you can read his (rather more thorough) review here.
Posted by Peta at 17:59

Labels: Alan Bradley, The Sweetness at the Bottom of the Pie

I was definitely one raving out the book! I obviously didn't notice any of the errors that you did so you are more versed in that than I am. I'm certainly sorry they were there and it will be curious to see if you see improvement in the next book. I am about 50 pages in and am loving it as much as the first one.

I remember Carl talking about this book and it sounds fun, a bit out of the ordinary.

That's a pity about the errors, but on the other hand, I'm sure I'll completely miss them :P I really think I'll enjoy this, so thank you for reminding me of it!

Ladies - It's a very sweet, old fashioned murder mystery so I hope you enjoy it as much as Carl did! The errors are not enough to ruin the story and I blame the editor - who should have got someone English to have a squizz before going to print.

Carl - I look forward to reading your thoughts on Book 2. It's not out here until next month but I shall certainly keep an eye out for it!