I bought The Enchanted April several years ago in an Oxfam because I liked the title (so shallow!) and it's sat on my bookshelf ever since. Last week I read a fab review by Nymeth that started with the following quote: 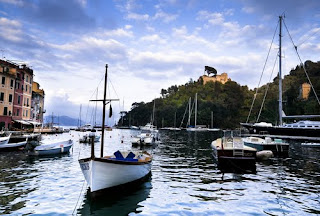 "To Those who Appreciate Wistaria and Sunshine. Small medieval Italian Castle on the shores of the Mediterranean to be let furnished for the month of April. Necessary servants remain. Z, Box 1000, The Times."

It's this advert that inspires Mrs Wilkins and Mrs Artbuthnot to throw caution to the wind and, along with Lady Caroline Dexter and Mrs Fisher, they spend April in Italy. I'm not going to do a proper review so direct interested parties towards Nymeth's recent, very thoughtful one, instead. Like her I enjoyed the developing characterisations, the gorgeous nature descriptions and the gentle plot. Go read!

I will mention that, having read this delightful book, there is nothing I would like to do more than spend April in Italy right now! Mind you - not sure my budget could extend far enough to hire the castle in Portofino (see above nestled on headland) which was where Elizabeth con Arnim spent her own April and was inspired to write this book. Slightly offputting it's also where Rod Stuart/Penny Lancaster and Wayne/Colleen got hitched. Still trying to get over that and recover the magic of the story!
Posted by Peta at 18:49

Sigh, I want to pack my bags and go to Italy too! Especially as I look out the window and see the rain fall. I'm glad you enjoy it as much as I did :D

Oh no I will be seeing Wayne's face throughout the book now ;)

Nymeth - tell me about it! Although the sun has been shining here recently it's definitely nowhere near time for all those gorgeous flowers that von Arnim describes so beautifully!

Jodie - please accept my deepest, and most humble, apologies :)