The Name of the Wind - Patrick Rothfuss

This is a Once Upon a Time IV read.

I have one very strict rule when it comes to reading books that belong to a series. The series must have been already written. All of it. The only exception is if I am absolutely sure that the novel can be read as a stand-alone too. There is a reason...

Many years ago, in 1995, I had a summer job at the Bertram Books Warehouse. These are the guys who supply bookshops, and libraries, with stock. At this point it was still a family owned business and they had a massive warehouse near the centre of Norwich which was about a mile from where my parents lived. The point of this story is that they also had a staff bookshop where the damaged books were sold for 10% of cover value. As you may imagine this meant that they received a substantial proportion of my wages straight back!

To cut a long story short, with diligent application, I was able to build up a Wheel of Time collection for a fraction of its actual cost. All six books. The eagle-eyed reader will have spotted a flaw in this purchase but the younger Peta was very pleased with herself. I read all six books back to back. And then realised that although Lord of Chaos has an epilogue (you see, I'd flicked to the end of the last book to be sure that there was a "proper ending") this was not the Last Book in the series. The next year A Crown of Swords came out and, having waited for a while for it to be released in paperback, I started the whole series from the beginning and when I got to the end of the seventh book I realised that this was not the Last Book in the series... Much gnashing of teeth and rending of garments ensued and it was at this is point that The Rule was implemented and it has not been broken since. 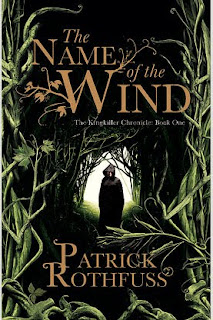 Now I have known for a while that Patrick Rothfuss is one pretty cool guy. I read his blog. I've bought (too many!) tickets for his fundraisers. I've seen evidence that he loves Ana from The Book Smuggelers. I've read other people's universally raving posts about his debut novel and watched the central character, Kvothe, progress to the semi-finals in the cage matches where he was beaten to the final by Jaime Lannister. Who stars in another rather famous series that I have not read. Because it is not finished.

So why give in now and come to the party so late? Well. I'd just finished Absolute Sandman One and wanted to read a really good fantasy novel. One that I knew would be excellent.

I also had a nasty feeling that I was missing out on something that I shouldn't be.

So having given in and broken The Rule was it worth it? Well. All I can say about this book is "Oh to the Em to the Gee". Please note that phrase was not used seriously! This guy can write and I absolutely LOVED this book. Kvothe has to be one of my favourite ever heroes, he has a great story to tell and I have (almost literally) not been without my nose in this book since picking up first thing yesterday. Hurrah for bank holiday weekends!

In fact I loved it so much that I have already placed a reservation for it with the library - even though there is no confirmed release date and amazon currently has it scheduled for August 2011. It seems that two other people from Norwich can't wait either though as I am already third in the queue!

Clearly I am gushing too much to be able to explain clearly why I loved it so I suggest reading what the following bloggers thought:
A Dribble of Ink (plus an interview in parts one and two)
Strange Horizons
Neth Space
The Book Smugglers
Fantasy Debut

Additionally, Orion Books have posted a really nice series of interview with Pat from Summer 2008 in three parts one, two and three. He really is such a cutie!
Posted by Peta at 19:15

Labels: Once Upon A Time IV, patrick rothfuss, The Name of the Wind

oh my.. i have had this in my tbr pile waiting for book 2 to at least have a true release date!..all reviews on this book are excellent! but i will hold off as long as i can!

Nooooooo! You must read it and read it now! You'll only have to wait what feels like even longer for book three. Go on... :)

I loved this one! I made the mistake of reading it shortly after it came out, though, so I've been waiting for the next one for a loooooong time. I put my name in for it at the library, but they eventually cancelled everyone's requests because it was taking so long and there was no confirmed release date. :(

That is a long wait! Cancelled library reservations? That's just plain mean. Perhaps I should place my pre-order as a back-up plan...

Technically I have the same rule, but I'm a masochist and break it all the time :P Anyway, this sounds absolutely excellent, and weirdly enough I don't think it'd made it onto my radar yet. That's fixed now though :P

I'm also wary about starting series with no definite end, but I think you have to make expectaions for those long fantasy cycles - what if they're never finished?

Nymeth - Yay and I hope you love it as much as I did!

I read this last year on the advice of a friend, and I accidentally fell into the Crown of Swords pool as well (the water's excellent) even though I have the same rule as you. Now I'm sitting here making Patrick Rothfuss and George R R Martin voodoo dolls and then wrapping them in bubble-wrap so they don't pull a Robert Jordan on me.

I've managed to avoid falling into the George RR Martin (or Steven Erikson) pool but pretty sure that it wouldn't take much to persuade me to start...

I just read this book a couple of months ago and loved it as well. It's now one of my favorite fantasies and I'm eagerly waiting for the next one to come out.

I'm glad you loved it as well! Assuming that the rest of the series is as good as this first book (and no reason to think they wouldn't be) then this will definitely be one of my favourite fantasy series.

the cover looks great. i'm not too strict with series but i can see your point. have a happy read-a-thon-ing today!

Looks like you are making great headway
Keep up the reading, don’t let that head sway
Eyes on the page and coffee in hand
You’ll be entering a new land.

I've been wanting to read this one!

I've heard nothing but amazing things about this. I'm glad you enjoyed it so much, especially since you broke your rule...one similar to my own which was also instituted because of my frustrations with the Wheel of Time series taking FOREVER. Hopefully it won't take too long for the other books, although I've heard he is struggling with edits on book two.

Glad to hear I am not the only sufferer! I will absolutely break my rule again next March when Wise Man's Fear is released (hurrah! an official date!) and what a great excuse to read the Name of the Wind again but then it'll be a long, long wait for book three... :(