This was read for the Graphic Novels Challenge 2010 and was my non-fiction read participating in Heather at Tales of a Capricious Reader's April mini-challenge. Last year I wrote about reading Guy Delisle's The Burma Chronicles and so when I saw the theme for this year's mini-challenge was non-fiction it seemed like a good time to read one of his earlier books. 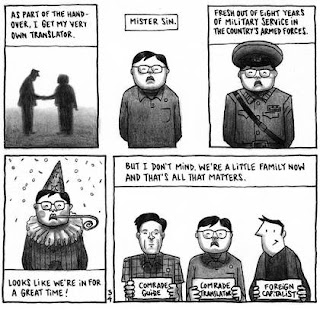 Guy Delisle is a Canadian animator, illustrator and author who spent two months in early 2001 living in a drab hotel in Pyongyang whilst working on a project for Scientific Educational Korea. He can only leave the hotel when accompanied by his translator and official guide, who are unquestioningly loyal to the regime. As he is dragged around the compulsory, and propaganda filled, tourist sights his observations are both thoughtful and illuminating offering a rare insight into life as a foreigner in this very restrictive country.

Clearly Delisle found his experience living here incredibly frustrating as well as sometimes surreal. Pyongyang itself strikes me as a very weird and sterile city - kept immaculate by teams of creepy citizen "volunteers". In telling the story of his experience living there, his gentle humour, when paired with such deceptively simple and expressive artwork, works so well for me so although this was not a light-hearted book to read it was a thought-provoking and interesting one.
Posted by Peta at 07:52

Just came here through the Graphic Novel Challenge website. I wanted to read your review as I recently read (but have not quite yet posted my review) of Burma Chronicles. I really enjoyed it, and so was interested in Pyongyang, though I can't find it in any bookstores. I really like Delisse's sense of humor.

This is not quite as much fun as The Burma Chronicles and I would suspect that Delisle didn't enjoy this experience as much and was rather lonely. You are quite right about his sense of humour though - it's what really makes these books. Good luck finding a copy of this one to read!