This is both a Once Upon a Time IV & Graphic Novels Challenge 2010 read. 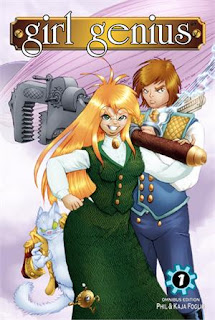 On Friday I read a glowing joint review from The Book Smugglers (who are currently celebrating a second Steampunk Week) about this omnibus edition of the first three volumes in the Girl Genius series. So, despite current attempt to resist adding to Book Mountain, on Saturday my copy arrived and I spent a rather lovely afternoon in the garden reading it whilst enjoying the sunshine. Which, it should be noted, had a rather detrimental impact on the book's spine. :(

Girl Genius is an online webcomic and can be read for free - starting here with new pages released every Monday, Wednesday and Friday. Described as a "gaslamp fantasy" featuring Adventure, Romance and Mad Science and, honestly, what more could you ask for?

The Girl Genius in question is the curvaceous Agatha Clay - a student at the Transylvania Polygnostic University who unable to build anything that actually works and seems destined for a lackluster career as a minor lab assistant. Chuck in a tyrant Baron Wulfenbach with an airship city, his son Gilgamesh (perhaps a hint of lurrveee for later episodes?) , a host of supporting characters (mostly made of awesome!) and an action-packed plot and you have a story that is both light hearted and funny. Oh - and I absolutely loved the artwork too.

After the first book, the series is released in colour however the omnibus was black and white. I don't think that was hugely detrimental to my enjoyment but having had a look at the panels online I would have definitely preferred to read in colour. I would absolutely love to be able to justify the purchase of the whole series in individual editions but am not sure even I can convince myself of the $23 a pop (plus post from the USA) investment when it's available free online. Unless it was an investment, of course....
Posted by Peta at 07:51

Oh those smugglers they are presuasive. I think my TBR list has got a little fatter since they began their steam punk weeks.

Tell me about it! I dread to think how much I would spend if it was not for the imminent house move keeping me (faintly) sensible...