is the first in Jim C Hines' Princess series of books and features the what-happened-next for Cinderella, Sleeping Beauty and Snow White.


For Danielle (Cinderella) the story didn’t end when she marries 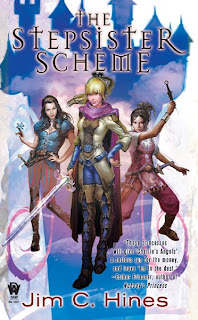 Armand, her prince charming, and she discovers that life is not always happy ever after. Now a Princess herself, and living at the palace, she finds herself struggling with the lack of self-worth that is the inevitable result of years of systematic bullying at the hands of her (now deceased) stepmother and (still living) stepsisters. Suddenly, Charlotte appears at the palace, tries to kill Danielle with access to surprisingly strong magic that she shouldn't have had and hints that Armand, who she still feels should have married her instead, has been kidnapped. To top it all, Danielle discovers that she is pregnant...

(This is not your usual fairy tale).

Despite best efforts, Charlotte escapes and step forward Armand’s mother, Queen Beatrice, who has, it emerges, employed two Princess bodyguards aka Snow White and Sleeping Beauty. In this unusual spin on the usual fairy story, it’s the damsels who head off to rescue the Prince. Talia (Sleeping Beauty) was especially damaged by her “fairytale” experiences but all three Princesses have serious trust issues and the causes emerge throughout the course of the book as the three women risk their lives to get Cinderella's prince back.

The Stepsister Scheme has an action packed storyline featuring very capable (if emotionally damaged) heroines who are fearless, capable and brave. There is honestly never a dull moment in this ‘girl powered’ what-happened-after tale and I enjoyed it very much. Next in the series is The Mermaid's Madness in which the princesses face the (not so) Little Mermaid. Sounds interesting!

I've read some of Hines' interviews and I am pretty sure I've read some stuff either on his blog or his comments on other blogs and find him to be very entertaining. He had some interesting things to say about this book and the Mermaid one that made me take a second look at them. I think they sound like really fun reads, and I love the cover art.