When he saw that I had picked up this book as my next read, Mr B commented that I should perhaps take a break from selecting so many “rotting my brain” books back to back. But with a streak of SF&F books as much fun as the ones I’ve had the pleasure of reading in the last couple of weeks there’s not much chance of that! Please note that I’m going to avoid getting into the whole debate with him about why just because a book has magic/dragons/elves or is set in a fantasy land/outer space that does not make it mind-rotting! I'll have to force him to read some... 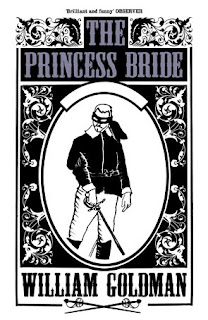 The back cover of my copy of The Princess Bride

What’s not to love about that for a story taster?

The edition I read was the 25th anniversary one (love Nathan Burton's cover!) which has an additional forward from William Goldman in which he talks about his struggles editing the first edition of S Morgenstern's classic, but occasionally impenetrable, Florintian tale. This is a story that his father read for him as a child and his version extracts only the "good parts" as selected my his father that move the plot along at a pace.

That meant that it took thirty-five bit-champing pages to get to the start of Chaper 1, The Bride, when the “proper” story eventually kicked off and we are finally introduced to Buttercup, who will grow up to become the most beautifulest lady indeed, and how she attracts the eye of the evil Prince Humperdink, and Wesley the farmhand who loves her very much indeed.

I am enormously fond of Rob Reiner's film version of this story and have watched it a number of times over the years. ('My name is Inigo Montoya. You killed my father. Prepare to die!') Allowing for differences between the screenplay and the book, this means that I pretty much knew what was going to happen to the characters from the outset but I don’t think that my reading experience significantly suffered as a result. The “story” of The Princess Bride is really only half of the book with the other half consisting of italicised asides from Goldman commenting on his experiences and decisions taken whilst editing Morgenstern’s original tale.

The edition I read also includes a new end section dealing with Goldman's attempts to secure the rights to abridge Morgenstern's follow up book (against stiff competition from Stephen King) called Buttercup's Baby. This includes a sample treatment of the first chapter of that book (with the usual asides from Goldman) which left too many threads dangling for my liking but does give more depth to Fezzik and Inigo's characters.

I must admit that I'd expected to read a book version of the film and I was very pleased to discover that wasn't entirely the case! At heart, this is an entertaining, swashbuckling romance and although I gather some readers find the asides extraordinarily irritating I was not one of them!

This is my favourite book hands down - I think it has to do with reading it when I was 16, and has since become my bad day book, when I'm in a rotten mood, it's what I read to put me in a better mood again. Never fails. Love every part of it. Except that the reunion scene at the bottom of the hill was cut out. Talk about a lame way to avoid writing a potentially awkward scene!
-Laura

I can imagine that it would be the perfect "comfort" read! I agree that a properly written (and touching) reunion scene would be good but suspect it would have been too icky for Mr Goldman to handle! :)

" ('My name is Inigo Montoya. You killed my father. Prepare to die!')"

Just reading this took me back to when my girls were small. We took them to the cinema to see this film which totally enchanted us all. The above phrase became a family joke and even now that my daughters are grown up, all I have to say is My Name is... and they finish the quote.

I also loved the ROUS - Rodents of Unusual Size....

The film is sooo fabulous and I adore the character of Inigo - so fabulously swashbuckling! I'd love to read his story if only Goldman would write it...