This is my first Sci-Fi experience read! 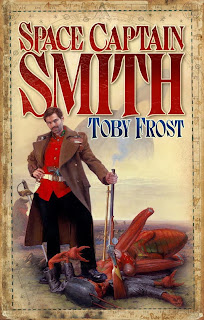 Gosh. How on earth do I start to describe Space Captain Smith

in a way that it'll all even faintly make sense? Perhaps having a good look at the cover will help. See that Victorian looking chap with the immaculate moustache? Yes. That's Captain Isambard Smith posing for a photo with one vanquished alien...

The blurb: "Together with his bold crew- a skull-collecting alien lunatic, an android pilot who is actually a fugitive sex toy and a hamster called Gerald- he must collect new-age herbalist Rhianna Mitchell from the New Francisco orbiter and bring her back to the Empire in safety. Straightforward enough – except the Ghasts want her too and, in addition to a whole fleet of Ghast warships, Smith has to confront void sharks, a universe-weary android assassin and John Gilead, psychopathic naval officer from the fanatically religious Republic of Eden before facing his greatest enemy: a ruthless alien warlord with a very large behind…"

It's the 25nd Century and the British Space Empire is thriving. Space Captain Smith, as you have probably gathered, is a parody of the Space Opera genre. Frost has an affectionate sense of the absurd and this is a book that does not take itself at all seriously. Packed with action, and with an amusing cast of misfits, this book was effortless, chaotic fun.

With two published sequels, I'm sure this is a franchise that'll grow and I shall be keeping my eye out for the next installment! I know it's a bit late for the festive season but Toby Frost has written a couple of Christmassy short stories, When Slay Bells Ring and The Celery and the Ivy. Well worth reading if you fancy a series taster!
Posted by Peta at 09:39

Drool those look and sound fantastic, but I had no idea they existed before you reviewed this one. What would I do without book bloggers?

I often think that without book bloggers dangling temptation in front of me, I would spend a lot less money on books! :)

This sounds like good, irreverent fun. I'm glad you enjoyed it and am so glad you are participating in some SF reading!