Because of Kristin Cashore's debut novel, Graceling, I fell rather early on in the 2010 reduced book-buying steeplechase and on New Year's Day I placed an order for her second book, Fire

which is a sort-of stand alone prequel. A combination of bank holiday and the snow that's currently covering much of the UK meant it took a week to arrive. What agonies! 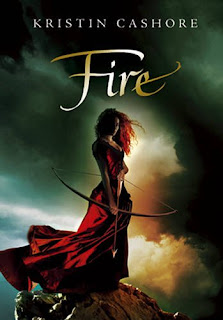 When I finished The Princess Bride I meant to select another Sci Fi book for the Sci-Fi Experience I am participating in but somehow, at 10pm, I found myself holding Fire instead. I had only meant to read a couple of chapters (yeah right) but somehow read the whole book in one delicious gulp. Oh how my eyes stung!

Set over the mountains from the Seven Kingdoms, which was the setting for Graceling, is The Dells. With a very different manifestation of magic, this is a world filled with rainbow coloured "monsters" who are mutated versions of regular animals. Fire (named for her mane of red hair) is a rare mix of human and monster who is both stunningly beautiful and incredibly dangerous to those who are susceptible to her appeal. Her looks confuse the minds of those around her and she unwittingly inspires either mindless adoration or intense hatred.

Before his death her monster father, Cansrel, was adviser to the former king and she has inherited his ability to read people's minds and manipulate their actions. Cansrel was power hungry and encouraged moral depravity in the King and between them they drove the Kingdom to the brink of civil war. Now, the young King Nash has inherited his father's Kingdom and together with his brother, army commander Prince Brigan, they are struggling to hold their land together.

Conscious of the part her father played in causing the war, and under the guard of Brigan, Fire leaves the safety of her secluded home and ventures into the wider world. She is very aware of her almost unique power over others and is determined not to abuse it as her father did. This means that her desire to use her powers wisely is in conflict with the practical need to gather information that could help to win the war and she struggles to choose the right course of action.

Given I read both of these books within a week of each other, it's hard not to compare Fire with Graceling and I should say that I love them both but in slightly different ways!

Fire is both similar to, and very different from, Katya - the lead character in Graceling. Both are struggling to come to terms with their uniquely dangerous abilities and have to deal with the fear and distrust that they inspire in others. Both in their late teens and on a journey of self-discovery trying to define their identities and find their morality whilst dealing with almost constant personal danger. Both are beautiful, capable, independently minded and develop relationships in which they are very much equal partners.

More adult in tone, and with a more complex plot, than Graceling the story takes longer to establish itself but once it does it's so, so very enjoyable! At the risk of sounding like a gushing girly, Kristin Cashore is a definite new favourite author of mine and her next book, Bitterblue, is on my insta-buy list when it comes out!

Peta, I loved this book as well and couldn't put it down. Can't wait to see what Kristin Cashore comes up with next.

So glad it's not just me! I actually had a dream last night where a friend who is going to Boston next week came back with an advance copy... Dear me!

The cover alone makes me want to pick up the book. It's really a striking cover. But until now, I never realized it was a "prequel" to Graceling which is also on my TBR list.

I think the cover is gorgeous! It is a prequel of sorts but I would probably read Graceling first. She says cryptically...