I was two (and a bit) books into Stephen Donaldson's Gap Into space opera series when I suddenly realised that I had Space Sickness and needed some antidote. 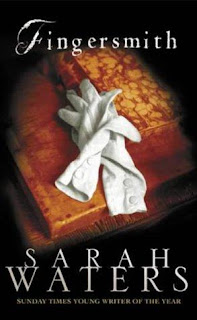 Deep in the throws of an attack of Bibliocolicism earlier this month, and for reasons I no longer remember, I purchased Sarah Water's novel Fingersmith

(which was shortlisted for both the Man Booker and Orange prizes) and it has been the absolutely perfect read to break up a Sci-Fi overdose.

Told from the point of view of two orphans of a similar age, this is a great spin on one of my very favourite sub-genres – the Victorian crime novel.

Susan Trinder is the orphaned daughter of a hanged murderess who has been raised in London by her adoptive mother, Mrs Sucksby in a household with dubious moral values. The home’s lose family unit has an enterprising approach to making money including baby farming and the expert laundering of stolen goods.

At the age of seventeen, Sue is drawn into a plot to help Richard “Gentleman” Rivers woo an heiress. To help him to achieve this, she needs to play the part of a lady’s maid, befriend her new mistress and convince her to marry Gentleman. At which point, he will have the girl confined to a madhouse, claim her fortune for himself and pay Sue (and Mrs Sucksby) a healthy fee.

To this end, she travels from London to the very different environment of a lonely and crumbling country house, where she enters the service of Miss Maud Lilly – who was also orphaned as a baby. Maud’s mother died in a mental institution, where she was placed by her brother, and Maud was brought up by the nurses there for a number of years before her Uncle sent for her to take up secretarial duties and help him to compiling a dictionary of sorts.

As Sue gains Maud’s confidence, and grows fond of the lonely girl, she begins to doubt her ability to go through with the con and she wrestles with the conflicting need to bring home money to her adoptive family.

The book is split into three parts with Sue opening and closing the story and Maud’s point of view over the same initial time period taking the middle section. I found Sue to be a more sympathetic character but Maud’s narrative really helped to add another layer of perspective to events as they unfolded.

This is a book with a cracking plot and nobody’s motives are quite as straight forward as they seem. I really enjoyed reading it and feel an urge to delve into Victoriana for a while. Or buy Sarah Water's other books as, other than this one, I've only read Night Watch.

I've just discovered that Fingersmith was made into a BBC drama in 2005 so I am clearly well out of the loop on this one! I would rather like to watch it but might have to leave it for a while to give me a chance to forget some of the plot twists.
Posted by Peta at 07:07