After all the excitement of the read-a-thon this weekend, I didn't quite get around to posting about Halting State

by Charles Stross which I read as part of the challenge. 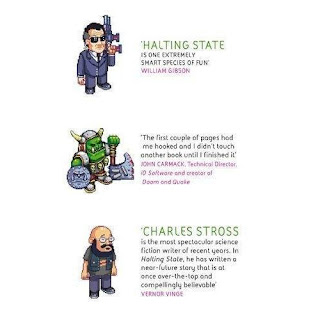 I read his Glasshouse earlier this year as part of the Sci-Fi experience and really enjoyed it. Halting State is quite different in tone, in that it's more overtly humorous, but at heart it is also an enjoyable, fast paced thriller.

Just wonderful. Like she has nothing better to do. But online entertainment is big business, and when the bodies of real people start to show up, it's clear that this is anything but a game."

Each chapter switches between the point of view of Sue Smith, computer coding expert Jack Reed and forensic accountant Elaine Barnaby who have been brought in to understand exactly how the theft can have taken place. From there, the body count starts to rise and the divide between virtual and real worlds starts to blur.

The book is set in Scotland in the near-future and there have been political changes - notably that Scotland is now a country in its own right however still a part of the all-powerful EU. There are also plausible predicted technological advances sush as people can be permanently connected to information via rather funky glasses which overlay information onto your view. (I want!)
The tone of the writing reminded me of Christopher Brookmyre in places - and not just because it's set in Scotland and features strong characters! By this I mean that murder, peril and a fast-paced plot are dealt with in an enjoyably humorous way and that the story does not take itself too seriously.

I found some of our reliance on insecure technology, and the exploitation that this could leave us as individuals open to, really chilling - even though it was by no means explicitly pointed out in a "look what power an unethical government could have over you!" way. Unchecked state surveillance seems to me to be very topical at the moment and, as a UK citizen, I have become increasingly uncomfortable with the way that policies are going over here since reading Little Brother opened my eyes last year. I saw that Cory Doctorow and Charlie Stross are giving a joint talk for the Open Rights Group called Resisting the All Seeing Eye and that could explain why they have books that highlight shared concern! I wish I could go but I guess I will have to wait for an online version.

I see that I have gone into campaign mode again - go visit the Electronic Frontier Foundation and see what I'm going on about. In summary, a fun read that (as you may be able to tell from this post!) is surprisingly thought provoking too.
Posted by Peta at 15:25