I was thrilled to bits when I managed to bags a pair of free tickets to an early screening of Coraline in 3-D last night and so skived off work early and dragged Mr B along with me to see it. 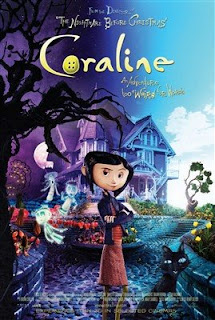 Firstly, I should mention that this is the first film I've seen in 3-D and... WOW! It takes a little getting used to but luckily we had several 3-D trailers first so I could get my eyes trained up a little before the credits started. Not all of the film seemed to be 3-D, and there were only a couple of out of screen moments, but the difference it made to the depth of field was gorgeous.

The film itself was excellent. It's both adapted from the book by Neil Gaiman and directed by Henry Selick, who also directed The Nightmare Before Christmas, so if you've seen that then you should have a good idea of the tone. Like Nightmare, this is also a stop-motion animation film and it is really stunning. I would definitely recommend seeing it in 3-D at the cinema if you get a chance as it's well worth it.

What I really like about this film is that Coraline is such a strong female lead who is backed up with an engaging (if occasionally slightly creepy) cast of characters. The Other Mother was absolutely terrifying and I would definitely urge caution if taking teeny-tinies but she was so brilliantly hideous that I can't imagine her any other way.

I've already mentioned that it's a stunning film and much of this is down to the beautiful set design. The Laika Studio, based in Portland, did an absolutely incredible job with both the sets and animation. I'd seen some of the mini-trailers so I knew that there was a huge amount of work behind the scenes but to get the film looking this good... Incredible. Hats off to these guys for the skill and craftsmanship that make this film such a work of beauty. Over on YouTube there is a nice set of official videos that include several from "behind the scenes". It certainly gives you an idea of the talent involved in bringing this film to the screen - as well as getting me to add the DVD to my wish list so I can see all the extras!

I know that it's a bit on the early side to talk about the 2010 Oscars, but I can not imagine that this film doesn't clean up, at least in the technical categories, and it should absolutely win best animated film. Five stars.
Posted by Peta at 06:42