is a strong debut novel from Andrew Davidson - which I picked up quite simply because it was on offer and I liked the contrasting fonts used inside... So deep! It turns out that it's a Richard and Judy book club read which could explain the discounting and its popularity. 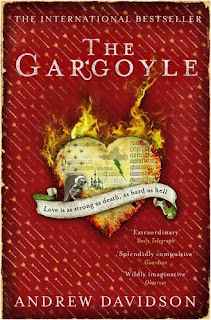 This is the whole, very helpful, synopsis: "A young man is fighting for his life. Into his room walks a bewitching woman who believes she can save him. Their journey will have you believing in the impossible."

No wonder I didn't know what to expect from this one! The books opens with our nameless narrator driving, under the influence, along a road in the present time when he is distracted by what seems to be a flight of arrows. He crashes into a ravine and wakes up in a burns ward having been severely injured. For me, his recovery process was one of the strongest parts of the book although the details of the treatment he receives is really quite horrific.

One day he is visited by sculptress Marianne Engel who tells him that they were once lovers in medieval Germany. Although he has his reservations about her mental stability, he is drawn to her and the stories she tells of their past life together alongside other tales of love. Her presence in his life pulls him out of a deep depression and helps him to start to view himself as anything other than a monster. Eventually he is able to leave the hospital although Marianne's fragile mental state, and commitment to her art, means that life together is never simple.

I enjoyed the stories within stories in this book and Andrew Davidson did a great job of capturing such a variety of voices. In contrast though I felt that there was more to tell about some of the book's "real" characters and that none of the hospital staff ever became fully realised despite some of them being quite prominent in the story. Although I found it hard to warm to either the Narrator or to Marianne (even sometimes wishing they'd "get a grip") that didn't lessen my enjoyment of the story as a whole.

If you want to read more about this book then it's got its very own website where you can also download an extract.
Posted by Peta at 11:39

Thanks for your review of this book. I read it earlier this year and I must say I enjoyed it much more than you did. I think it's my favourite book of the year to date. I couldn't get enough of this book. The stories were great and it was quite graphic when it came to the accident and the treatments.

I should emphasise that I did enjoy reading The Gargoyle and think that it's a really strong debut novel. If you enjoyed it, you might also enjoy Ferney by James Long which I read, and loved, last year.

This book is sitting beside my bed to read. Will get to it in May! Great review.