I've been dying to get my hands on Little Brother

for months - in fact, ever since Neil Gaiman mentioned it on his blog in such glowing terms. For some reason I got it into my head that it was only being released in the UK this month so didn't realise that I could have read the hardback edition months ago which is a little frustrating. There is a silver lining to this sad tale though as I managed to get my paws on a signed paperback edition instead.

Before I move on to talking about the book itself, I'd like to point out to anyone thinking about giving this book a try that the book is available from Cory Doctorow's site as a free download and feel free to discover for yourself why an author would choose to give away his books! He's recently written an interesting, and more in depth, article about his views on copyright for Lotus Magazine. 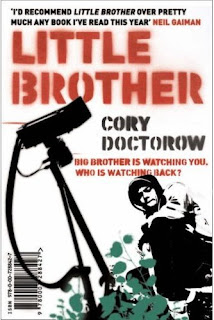 The title of this book is an obvious play on George Orwell's Big Brother which is pretty apt given that this is a novel about living under state control and constant surveillance.

"Marcus is only seventeen years old, but he figures he already knows how the system works - and how to work the system. Smart, fast and wise to the ways of the networked world, he has no trouble outwitting his high school's intrusive but clumsy surveillance systems. But his whole world changes when he and his friends find themselves caught in the aftermath of a major terrorist attack on San Francisco.

In the wrong place at the wrong time, Marcus and his crew are apprehended by the Department of Homeland Security and whisked away to a secret prison, where they're mercilessly interrogated for days. When the DHS finally releases them, Marcus discovers that his city has become a police state, where every citizen is treated like a potential terrorist. He knows no one will believe his story, which leaves him only one option: to take down the DHS himself."

This book has a much wider appeal than the teen market it was written for (even for the untrustworthy over-25s such as myself!) and it is an enjoyable, well written and fast paced adventure with plenty to keep the reader hooked. But it is so much more than that. It is also an extremely thought provoking illustration of just how easy it is for us to voluntarily relinquish civil liberties in the name of the common good and also how utterly ill-equipped the majority of people out of their teens are to recognise that it's even happening. I appreciate that some of the geek/tech content of the book could leave the uninitiated a little confused but I think that's the point. People are voluntarily allowing themselves to be out of the loop in terms of how technology is advancing and how it's being applied and I feel that, if nothing else, this book has re-opened my eyes to just how vital it is to be aware of developments in the world around us.

At the back of the book are two short essays and incredibly informative, slightly chilling, bibliography that gives a comprehensive view of books and places to visit online that will tell you more about why this topic really matters. It's well worth following those links and a good site to start is the Electronic Frontier Foundation.

An extract from an essay by Cory Doctorow about why he feels this is so important: "The difference between freedom and totalitarianism comes down to this: do our machines serve us, or control us? We live in the technological age that puts all other technological ages to shame. We are literally covered in technology, it rides in our pockets, pressed to our skin, in our ears, sometimes even implanted in our bodies. If these devices treat us as masters, then there is no limit to what we can achieve. But if they treat us as suspects, then we are doomed, for the jailers have us in a grip that is tighter than any authoritarian fantasy of the Inquisition. It’s my sincere hope that this book will spark vigorous discussions kid/adult about security, liberty, privacy, and free speech — about the values that ennoble us as human beings and give us the dignity to do honor to our species. Thank you for sharing it with the young people in your life — and for being a guide at a time when we need guides more than ever."

He also covers this in a Q&A with Publishers Weekly. IMHO, this is a book that richly deserves to be shared with the young, and old, people in my life as it is most certainly a worthy catalyst for an overdue debate on the steady erosion of our civil liberties in the name of protecting them.
Posted by Peta at 17:56