After reading lots of "proper" grown-up books so far this month, I felt in need of some space fiction and luckily my October charity bookshop haul was able to supply me with a book, by an author I'd never read before, that fitted the bill. 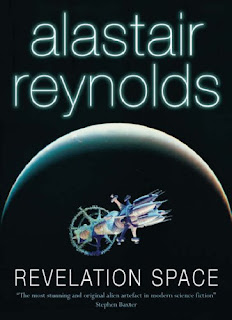 Alastair Reynolds is one of the Sci-Fi authors that I suspect I should have read by now. Revelation Space (Gollancz S.F.)

is his first novel and was published in 2000.

"Dr Dan Sylveste, an archaeologist who has for years been fascinated with the long-dead alien race the Amarantin, is about to discover something that could change the course of mankind. But before he can act on anything his wife is killed and he is captured when a coup sweeps across the planet Resurgam.

Meanwhile, an astonishing ship bearing a crew of militaristic cyborgs and a kidnapped Gunnery Officer is bearing down on Resurgam, crossing light years of space to enlist Sylvestes help to save their metamorphosing Captain. Only Sylveste, or, more accurately, the software programme containing his fathers knowledge that he carries in his mind, can save the Captain. None of them can anticipate the cataclysm that will result when they meet, a cataclysm that will sweep through space and could determine the ultimate fate of humanity."

Although I found the book hard work at the outset as there are some initially confusing names (see above!), lots of science, different planets, a large cast of characters and a rotating character point of view once I had settled in, I found it enthralling. Reynolds is (or was) an astrophysicist for the European Space Agency and he has clearly expended a lot of effort in infusing his Universe with a huge amount of detail. It's set in the not-too-distant future and it all feels very plausible, if sometimes in a little too much detail, and I quite fancy taking a lighthugger ship to explore!

Given this was his debut book, I can forgive the sometimes clunky dialogue as the quality of the world building is so high and I enjoyed the plot - especially when the strands started to come together. I look forward to reading the next instalment (hurrah - four more to go!) and I'm glad that I eventually got around to reading a Reynolds book.
Posted by Peta at 19:26