Whatever Makes You Happy - William Sutcliffe

According to amazon's book categorisation system, this is officially Lad Lit. A sub-genre I had no idea existed but you live and learn! Whatever Makes You Happy 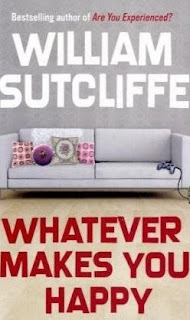 This book features "three men in their early thirties who are not (in the eyes of their alienated mothers) properly settled. Matt works for lads mag BALLS! and is a serial dater of girls half his age. Paul is an experienced hand at lying and evasion to keep his life choices a secret from his mother. Daniel spends his Saturday nights alone in his flat reading novels, pining for ex-girlfriend and love of his life Erin. The mothers decide to launch a co-ordinated attack: they will arrive, without warning, to stay with their sons for one week with the intention of man-handling them back onto the right path."

This book did not feel as satisfying as some of his earlier work and actually did feel like it belonged in a Lad Lit category. Some of the character stories were stronger than others (I wanted to know so much more about Matt's mother!) and I felt that these could have been plot lines for three novels rather than one linked by the tenuous thread of three simultaneous mother visits.

Nevertheless, it was an easy, enjoyable read with some food for thougt that made me really glad that my Mother lives around the corner and there's no chance she'll come and stay with me for a week to "sort me out"! I think...
Posted by Peta at 12:12