Scott Pack recently offered to send out five copies of the new book from Caroline Smailes, Black Boxes, and I was lucky enough to get my name to him nice and early. I received the book a couple of weeks ago and, I'll be honest, my first impression was to look at the layout of the first chapter and think "crumbs - this looks like hard work" and I moved it into the "must read but not just yet" pile. Before I go any further I shall explain that I was entirely wrong and that the layout, although very different from a standard novel, is so incredibly effective that the reader is utterly immersed in the heartbreaking life of Ana and her teenage daughter Pip. 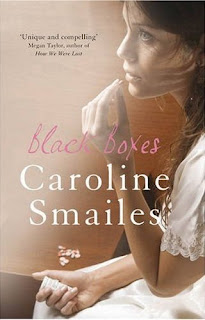 "Ana Lewis is trapped by her own expectations. Her intense relationship with fellow student Alex begins to crack beyond repair when she falls pregnant, and his subsequent withdrawal, emotionally and sexually are hard for Ana to bear. Eventually, following the birth of Pip and then Davie, Alex leaves Ana to a life of question and blame. Locked in her room for much of the time she woefully neglects her children, preferring instead to replay scenes from her life over and over, fighting the urge to blink for fear it should dissipate the memories."

The book is laid out in the form of two "black boxes". The bulk of the text is in the form of a transcript from an audio recording made by Ana after she has taken tablets in an attempt to end her life. The middle of book is a handwritten extract from Pip's diary that describes events in the weeks before Ana takes the tablets and subsequently we return to Ana's recording.

Whilst there is no doubt that Ana's descent into mental fragility is an incredibly sad story, it is the extract from Pip's diary that brought tears to my eyes. If I could have jumped into this book and protected Pip and her younger brother, Davie, from their mother I absolutely would have done. The diary is so convincingly written in Pip's voice that I really felt as if I was prying into her thoughts - especially as it's peppered with comments to her brother to stop reading it!

The technical execution of this story from Caroline Smailes is faultless. The different slant she takes in her way of telling the story of these who women is so effective that it's hard to believe that it's only her second book. Although a "difficult read" in terms of subject matter this is such a well written book that I would recommend it without hesitation.
Posted by Peta at 18:57