As I mentioned last week, I had the honour of hearing Toni Morrison reading from this book at the UEA LitFest and I am so glad that I did. She mentioned that she writes for the ears as well as the eyes and I found myself reading sections aloud to myself to fully appreciate the lyricism of this beautifully crafted book. Try it yourself - it really helps! 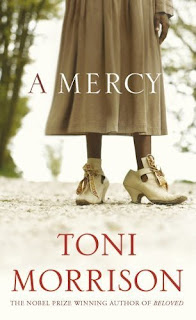 is a slim book that I find really hard to explain so I will steal the blurb from the back:

"In the 1680s the slave trade was still in its infancy. In the Americas, virulent religious and class divisions, prejudice and oppression were rife, providing the fertile soil in which slavery and race hatred were planted and took root.

Jacob is an Anglo-Dutch trader and adventurer, with a small holding in the harsh north. Despite his distaste for dealing in “flesh,” he takes a small slave girl in part payment for a bad debt from a plantation owner in Catholic Maryland. This is Florens, “with the hands of a slave and the feet of a Portuguese lady.” Florens looks for love, first from Lina, an older servant woman at her new master’s house, but later from a handsome blacksmith, an African, never enslaved.

There are other voices: Lina, whose tribe was decimated by smallpox; their mistress, Rebekka, herself a victim of religious intolerance back in England; Sorrow, a strange girl who’s spent her early years at sea; and finally the devastating voice of Florens’ mother. These are all men and women inventing themselves in the wilderness."

Each chapter in turn focuses on each of the four women living on the farm and, as time moves back and forward, we see how they ended up at this place in this time. The themes of religion race, gender, poverty and (or course) slavery in the context of the early years of America are dealt with intelligently and movingly. This is a beautiful, and deceptively simple, book that is absolutely going to merit a re-read so that I can appreciate the layers of the story.

Reviews from the Guardian, the Independent, the Sunday Times and the Telegraph.
Posted by Peta at 18:12