has more than a whiff of the gothic about it and it reminded me, of course, of Kate Mosse's other popular book Labyrinth

but also of The Historian

. Although that might be because I read that around the same time as I read The Labyrinth! 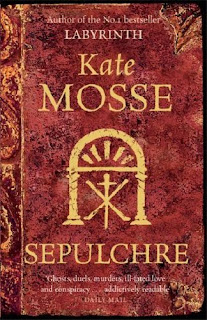 1891. Seventeen-year-old Leonie Vernier and her brother abandon Paris for the sanctuary of their aunt's isolated country house near Carcassonne, the Domaine de la Cade. But in the nearby woods, Leonie stumbles across a ruined sepulchre - and a timeless mystery whose traces are written in blood. 2007. Meredith Martin arrives at the Domaine de la Cade as part of her research for a biography she's writing. But Meredith is also seeking the key to her own complex legacy and soon becomes immersed in the story of a tragic love, a missing girl, a unique deck of tarot cards, an unquiet soul and the strange events of one cataclysmic night more than a century ago...

This is a book that feels as if it's been carefully planned to be a success in a similar vein to Labyrinth. Although sometimes the book seems to ramble a bit, the plot has some interesting elements and (as long as you don't take it too seriously) moves along at a decent pace. Overall, an entertaining read that's clearly been carefully researched.

There's a really detailed Sepulchre website that comprehensively covers the book, the author and locations usef. The edition I had also has reading group notes and photos of the locations that feature in the book. This reminds me when Mr B took me to Carcassonne just after I'd read Labyrinth (a coincidence!) and suddenly all the scenes set in and around the medieval Cité came to life for me.
Posted by Peta at 19:45