The Woman in the Fifth - Douglas Kennedy

I chose to read this hot on the heels of Sepulchre as it is also set in France so The Woman in the Fifth seemed like a sensible match! 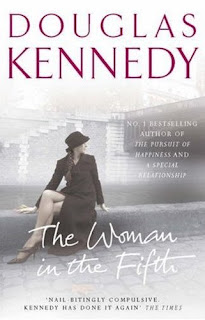 Harry Ricks has fled his wife, job and daughter following a romantic mistake with one of the pupils at the small American college he taught at. He's arrived in Paris with very little money, he's ill and he has no work permit.

Just when Harry begins to think that he has hit rock bottom, romance enters his life. Her name is Margit - an elegant, cultivated Hungarian emigre, long resident in Paris - widowed and, like Harry, alone.But though Harry is soon smitten with her, Margit keeps her distance. Harry's frustrations with her reticence are soon overshadowed by a ever-growing preoccupation that a dark force is at work in his life - as punishment begins to be meted out to anyone who has recently done him wrong. Before he knows it, he finds himself of increasing interest to the police and waking up in a nightmare from which there is no easy escape.

Douglas Kennedy is an accomplished writer and he succeeds in bring a very seedy Paris to life. I don't want to write too much for fear of spoiling some (based on amazon reviews anyway!) very unpopular plot twists but I say kudos to Kennedy for moving away from his more traditional style of work with this one. This is the fifth of his books I've read and I don't think it's fair to expect "more of the same" from an author and get annoyed if you don't get it. That's my tuppence posted anyway! :)
Posted by Peta at 13:00

Labels: Douglas Kennedy, The Woman in the Fifth