So many books and so little time! I'm doing my best to plough through my Birthday Books shelf and having great fun in the process. If only there was a job where you could just curl up and read enjoyable books. Must be somewhere... Anyone?

yesterday which means I must have been reading it pretty damn fast... 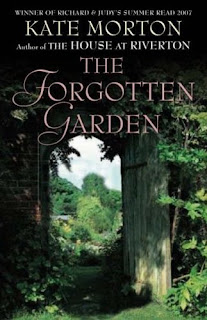 "1913: A little girl is found abandoned after a gruelling ocean voyage from England to Australia. All she can remember of the journey is that a mysterious woman she calls the Authoress had promised to look after her but vanished without trace.

1975: Now grown up, Nell travels to England to discover the truth about her parentage. Her quest leads her to Cornwall, and to a beautiful estate called Blackhurst Manor which had been owned by the Mountrachet family.

1995: On Nell's death her grand-daughter, Cassandra, comes into a surprise inheritance - Cliff Cottage, in the grounds of Blackhurst Manor. It is at Cliff Cottage, abandoned for years, and in its forgotten garden, that Casssandra will uncover the truth about the family and why little Nell was abandoned all those decades before."

The book is set in Cornwall and Brisbane, across the three main time frames and focuses alternatively on The Authoress, Nell and Cassandra. It whips between past and present at a rate of knots so there's plenty to keep you busy and lots of "clues" to look out for. An enjoyable novel that's perfect for lazing around with.

Now onto Joe Abercrombie - starting with The Blade Itself. I'm looking forward to this series so fingers crossed!
Posted by Peta at 20:18

I haven't read this, but there are echoes in what you say of a recent Reginald Hill novel, 'The Stranger House' which is about a young woman who comes to England from Australia searching for her antecedents. You might want to explore it as a companion piece.

I must confess that I've not read any Reginald Hill but that one does look really interesting and, as you say, a great companion piece. I shall have to add it to my "to buy" list!

Have you noticed how book covers have similar looks? This one looks rather like Mark Mills' The Savage Garden (American version) ...
Margaret Powling

I thought that they were trying really hard to make it look like her last book, The House at Riverton, which was a Richard and Judy read last year. I got distracted by the photoshopping of the trees in the garden though - some very odd things happening with the focus...

Hmm... I will have to check this out.

Wow, very enticing. Love the cover, too. And reminds me that I still haven't read The House at Riverton, which I bought on a whim ages ago.