Hrm - that post header looks like it's a real, and slightly intriguing, book title but actually this is a lazy post that finishes off my June reads by combining two books in one post! 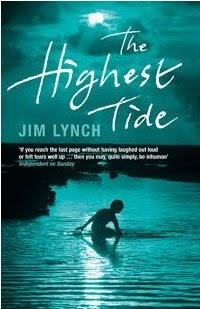 First up is Jim Lynch's The Highest Tide

. Set in Washington's Puget Sound, thirteen year old Miles O'Malley goes out in search of shellfish only to discover a washed up giant squid. He becomes a local celebrity as increasingly wild theories are developed to explain how the squid got there. Miles has a real passion for the sea, can quote books by Rachel Carson (who I had not heard of before this book) and is an acute chronicaller of minute changes taking place in the bay. Against this backdrop, his parents marriage seems to be falling apart, he has a crush on the girl next door and his best friend, an old lady called Florence is growing increasingly dependent on him in a bid to avoid being put in a home.

This is a charming "coming of age" book but for me the star was the Puget Sound and the wildlife that inhabits it. Jim Lynch, who lives locally, describes it with obvious affection and his observations are based on a close familiarity with it. As the Sunday Telegraph said in their blurb quote "Even the most hard-hearted readers will finish this book wishing they had their own bay to explore." I know I do!

If you want to read more, Bookslut has a great, very personal, view on the book here and there's an official website here. 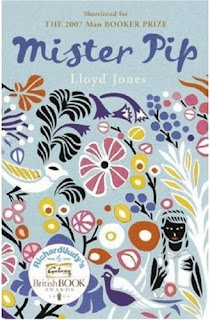 The last book of the month was Mister Pip by Lloyd Jones. I'll admit to being primarily seduced by Petra Borner's gorgeous cover illustration and not that it won the 2007 Commonwealth Writer's Prize or that it was shortlisted for last year's Man Booker or that everyone I know who has read it says I should too. I feel awfully shallow after writing that sentence... What a great book to end the month on though! It's a short book that really doesn't feel like it when you've finished.

Matilda is a young girl living on Bougainville, a remote tropical island in the South Pacific that's just erupted into civil war. Mr Watts is the self-appointed teacher of her school, and the island's sole white man, who teaches from just one book - Great Expectations by Charles Dickens.

I'm really not sure what I was expecting before I started reading this book. Certainly not what it turned out to be. It's a story in several distinct parts as events engulf Matilda. It's about love and friendship, about loyalty and sacrifice. It's about what people will do when their world is falling apart and above all it's about courage, imagination and perseverence.

Much to my shame, I didn't realise until researching this post that Bougainville is a real island and that the civil war is also quite, quite real. That certainly puts a very unsettling tint of reality on what I hoped was pure fiction. Lloyd Jones has written eight books so far and they seem to be slowly being brought out in the UK (with equally lovely Petra Borner covers!) and I'm looking forward to exploring more of his work.
Posted by Peta at 18:50