is a first novel about what happens when people who love each other don’t say so. It was shortlisted this year as one of the "books to talk about" for World Book Day but I first heard about it in a post called "Eeeeeee!". After reading that this was a book I really wanted to read at the start of this year however when Angela was kind enough to offer me a copy for review I declined it. Very politely and for the best of reasons as it was high on my birthday wish list and I felt it was cheating to "rob" her of a sale. 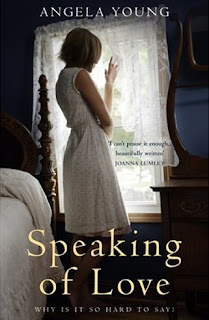 Aaanyway. I received a copy for my birthday and placed it in my TBR pile and then. Umm. I forgot about it a bit. This is not unusual and I promise that Angela is in good company! I should probably also mention that my TBR pile is less of a TBR pile and more of a TBR series of piles, some of which are stacked in front of the others... Speaking of Love finally rose to the top of the pile(s) a couple of days ago

This is a novel about what happens when people who love each other don’t say so. The narrative in Speaking of Love alternates between three different stories - Iris, who is a storyteller with a history of mental illness, her daughter Vivie and their neighbour Matthew who was Vivie's childhood friend. At the centre of their stories is a gradual realisation of the impact that Iris's schizophrenic episodes have on not only her life but on her daughter's too.

This is a beautifully written book that is brimming with empathy for its characters. Young takes a very compassionate view of the difficulties that her characters face and it's hard not to sympathise with the positions that they find them in.

Angela has a blog although it has gone quiet recently as she is working on her second novel. I really hope that is going well as I'd love to read more of her work.
Posted by Peta at 17:43

I have just read this ... thank you so much for it.

And I have added The Bookling to the reviews of Speaking of Love on my blog even though I'm still not blogging because I'm deep in writing my second novel (thank you also fo ryour good wishes for it).

When I come up for air - perhaps at the end of May, perhaps later - I shall blog again.