The subtitle for Mark Barrowcliffe's autobiographical book The Elfish Gene

is "Dungeons, Dragons and Growing Up Strange" and I suspect that should have given me just the tiniest of hints that he played a lot of Dungeons and Dragons whilst growing up! 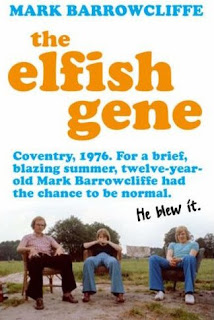 "Mark - like twenty million other boys in the '70s and '80s - chose to spend his entire adolescence in fart-filled bedrooms pretending to be a wizard or a warrior, an evil priest or a dwarf. Armed only with pen, paper and some funny-shaped dice, this lost generation gave themselves up to the craze of fantasy role-playing games, stopped chatting up girls and started killing dragons."

I've never actually played D&D, although I am familiar with the clichéd view of friendless spotty youths sitting around a table for hours rolling dice, but how you actually play the game was all a bit of a mystery to me. After reading this book, which is pretty much all about playing D&D, I am none the wiser and, if anything, I am even more confused than I was about how you actually play the game. I don't think that the appeal of the game is successfully explained either but perhaps that was because the story is being told from the point of view of an obsessive adolescent boy. I finished the book still wondering what the phenomenon is all about and, a little sadly, whether if I'd joined that D&D game in my first term at University my life would be any different... I strongly suspect it's something I would have become quite addicted to so perhaps it's just as well that I went to the pub instead.

Mark Borrowcliffe is excruciatingly honest about his utter lack of social skills whilst growing up in Coventry and his self-deprecating humour definitely helps sweeten the subject matter for those, like myself, who were not gamers. I couldn't help but feel a huge amount of sympathy for his family as he earnestly keeps them up to date on the progress of Alf the Elf or Effilc Worrab and the appeal of the book is possibly that he understands the child that he was and does not attempt to paint him in a different light. A book that UK gamers are likely to appreciate more than lay readers but an enjoyable read for a novice like me too.
Posted by Peta at 07:57