Mordechai's Moustache and His Wife's Cats

by Mahmoud Shukair is a collection of short stories and vignettes that formed part of last week's free book bonanza. 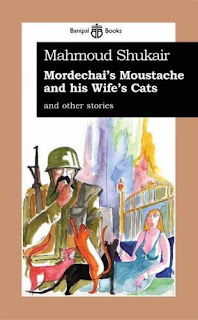 Published by Banpil Books this short collection was translated by Issa J Boullata, Elizabeth Whitehouse, Elizabeth Winslow and Christina Phillips and is, according to their website, Shukair's first major publication in English. The book comprises of four short stories and then three collections of short vignettes (divided by translator) which I actually enjoyed more than the stories.

The book finishes with two essays that talk about how Shukair started to write and put some of his stories into context. He was born, and brought up, in Jerusalem and was jailed twice by the Israeli authorities before being deported to Lebanon. He returned to live in the city in 1993 and there are clear political overtones to several of his stories which often feature Palestinian protagonists.

If you fancy trying out a free sample, the titular story is available to read online from Words Without Borders.
Posted by Peta at 08:00