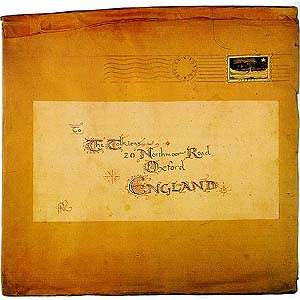 Every December, from 1920 to 1939, an envelope bearing a stamp from the North Pole would arrive for J.R.R.Tolkien's four children. Inside it would be a letter in strange spidery handwriting and a beautiful coloured drawing or some sketches. The letters, which were initially left in the fireplace as if they had been brought down the chimney, were from Father Christmas and described life in the North Pole.

The letters also include notes from some of the other inhabitants of the North Pole as, when Father Christmas is too busy to write, his helper Ilbereth the Elf fills in for him. The clumsy North Polar Bear in particular is a delightful character and I just adore the humour in some some of the comments he scrawls on the letters that Father Christmas writes to the children.

To coincide with the 25th anniversary of its first publication, Letters from Father Christmas was re-issued and now includes every one of the letters and pictures that Tolkien sent to his children. Online examples of the illustrations in this book are hard to find but I did find a slide show of images in the New York Times and I've "borrowed" the envelope from there to use in this post. These illustrations, and the accompanying text, should give the prospective reader a good flavour of what to expect and certainly reflect the sadness Tolkien must have felt when there was only one child left at home to receive the letters in the later years.
Letters from Father Christmas

is an absolutely charming and inventive collection whose appeal goes beyond the Tolkien fan base. I wish that I had owned a copy of this book as a child as I can easily imagine reading it becoming an annual tradition and I shall do my best to inflict it on children of my aquaintance this year in the hope of kick-starting one.
Posted by Peta at 09:58