The Quincunx: The Inheritance of John Huffam - Charles Palliser

I received this book as a gift last Christmas and, at a whopping 1200 pages long, it nearly came with me to Kenya earlier this year before being put to one side when I realised that Neal Stephenson’s enormous Baroque Cycle was likely to comfortably occupy me for a fortnight. Which it most certainly did! 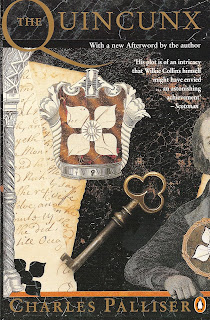 It then languished on the shelf until I read this post by Sam Ruddock from Vulpes Libris. After that, how could I resist selecting it as my reading material for the Christmas break? Motivated by the thought of carrying such an enormous book in my handbag on the walk to, and from, work for reading this week at lunchtime I stayed up last night until I finished it. Wow. That was a book worth reading although I really should mention that it’s not often that you get to the end of a book and feel as though what you really need to do next is to go back to the beginning and start it again!

was published in 1989 it is actually an incredibly authentic pastiche of the mid-nineteenth century novel. It is set in a very plausible mid-nineteenth century England with the action split between provincial village life and the grimy city of London. The book charts the fortunes, over the course of about fifteen years, of a single mother and her young son, John Huffam, as told through the eyes of the latter.

We follow John’s narration as the world collapses around him and his mother when, following an ill-advised investment on her part, they have to leave behind their relatively comfortable, and safe, life in the country to face increasingly grinding poverty in the slums of London. I think it’s worth an aside at this stage to mention that the depiction in this book of life for both rural and urban poor is absolutely excellent and so vividly portrayed. It’s clear from the early stages that this transition is not entirely his mother’s fault (although the young John may not agree with that) and that there is a mysterious plot against the pair of them centred on a codicil to a will written half a century before…

We unravel the mystery surrounding John’s birth, and who his family is, as he does and, like him, the reader struggles to sometimes understand the motives and connections between the individuals who are interested in him.

There is a really complex web of intrigue at play in this book and, to add to the challenge of following the twists and turns of the plot, we have a sometimes unreliable narrator. For a good part of the book this is because we are seeing events through the eyes of a young child. What I did enjoy was that evidence is presented to us (although sometimes we receive conflicting reports from protagonists) and the reader is allowed to draw their own conclusions about events which I found occasionally differed from those made by John. I also found that a couple of times he allowed a investigative thread to drift that I would have wanted to follow – which throws his position of trusted narrator into an interesting light.

The edition I read has an afterward by Palliser in which he explains more about the careful way in which the book has been structured and hints at more layers to explore than I found. For example the novel itself is divided into five parts, and each part is divided into five books and then five chapters… One device I did really like was that at the start of each part was a family tree that grew as John (and our) understanding of how his relatives fitted together and what their motives towards him might be.

I’m sure I’m not doing the book any justice at all but if you like the BIG Victorian novels (think Wilkie Collins) then you’ll probably really enjoy this one. As mentioned earlier, it is rare that you finish a book and feel the need to start again at the beginning so this is definitely a book I will re-read in a couple of years time. But next time I will be keeping a closer eye on the evidence as it unfolds…
Posted by Peta at 07:36

Labels: Charles Palliser, The Quincunx: The Inheritance of John Huffam

I am so impressed you read the whole of the Baroque cycle when in Kenya (did you use a torch during the 'lights out' times or did the places you stayed not have to cut off the power at certain times?). This book sounds right up my street (you doesn't love a hefty historical with the potential to tone your arms while you carry it?). Thanks for the review and hope today has been a painless day at work (my Director came in and sat behind me today, looking at my screen).

It was relatively painless today at work although for some reason there were even less people around than yesterday! Luckily those in did not include anyone too senior to stare at my screen...

We did have the electricity turned off at night in one place we stayed but generally most of my reading was done lounging in the semi-shade whilst enjoying being warm!

I suppose you make a valid point - I should carry heavier books in to work and use the journey as an opportunity to exercise my upper body too! :)

This was the very first book that I read after I got married. I had purchased it while working at the bookstore and I took it with me on my honeymoon...Mary and I have always been good readers and there was no way we were going to be without books even on the honeymoon! Ha!

I really enjoyed it. At the time it really rocked my world. I couldn't believe how deeply enmeshed in the story I became. I ended up finishing it on a late night reading binge because I was just so sucked in.

It's a great book to get lost in! I wish I could remember what I read on my honeymoon and I've checked my diary but I didn't say what it was that I was reading! Part of our trip was spent on safari and because we were going on light aircraft we were restricted to 15 kilos each in soft luggage. This meant that I could not take nearly as many books as usual and relied a lot of the collections left behind by other guests which was quite eclectic!