Last year Mr B and I both really enjoyed William Boyd's excellent novel Restless so I thought it was worth digging out more of his work as otherwise I've only read his African novels.

The New Confessions is the story of John James Todd who, now aged seventy, is looking back on his life and reflecting on his achievements. After a lifetime of obsession with Rousseau’s Confessions, his own version of a confessional memoir recounts his life as lived through the course of two World Wars and includes his memories of friends, relationships family, romance and recounts his career as an early film director. 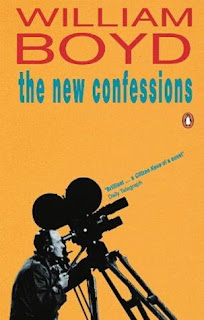 Before I start, it’s definitely worth mentioning the book’s fantastic opening: “'My first act entering this world was to kill my mother. I was heaved - a healthy eight pounds - lacquered and ruddy from her womb one cold March day in Edinburgh, 1899.”

After this inauspicious entry to the world, Todd begins by recounting his lonely, and largely loveless, childhood in Edinburgh he is dominated by his stern father, bullied by his older brother and is effectively brought up by their housekeeper, Oonagh. We follow the young Todd to an austere boarding school where he meets the wonderfully named Hamish Malahide – his only childhood friend.

Following adolescent heart-break, Todd enlists in the army and the story moves to the battlefronts of WW1. Following the war, he embarks upon a career as a film director and the action moves from London to pre-war Berlin and then on to Los Angeles.

Because the book is written in the style of an autobiography, events are depicted through the eyes of Todd and I felt that he was not always a reliable narrator. As a character, he is selfish, self centred, not very pleasant to those closest to him although endeavours to paint himself in the best possible light wherever possible. This makes for an interesting reading experience as the reader needs to form their own opinions about his honesty and try seeing events through the eyes of the other participants to try to dig out the truth of the situation.

For me, the early years of Todd’s life are what made this book. Perhaps this is because he was a more forgivable person in those years but also because Boyd really brought the WW1 and Berlin sections of the book to life for me as events were so vividly portrayed. The last third of the book didn’t really do it for me in the same way and, although it was interesting to read about Todd’s brush with McCarthyism the Los Angeles / present day section didn’t live up to the earlier part for me.
Posted by Peta at 07:50

a very different opinion
I'm a great admirer of Willian Boyd, a person who has enjoyed his earlier novels. I was really looking forward to reading "The New Confessions". I started it and I persisted through the first 100 pages or so, but I couldn't finish it - a very rare w