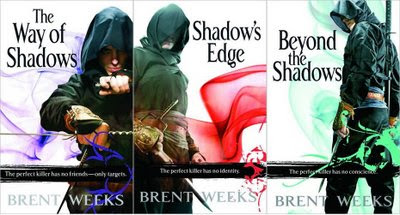 Released in the UK by Orbit late last year, The Way of Shadows

and Beyond the Shadows are a debut trilogy from Brent Weeks which seem to be piled up on three-for-two tables everywhere I go. I say everywhere but really I mean in large bookshops and online. I suspect Orbit are keen to push the Brent Weeks brand and I think that the cohesive cover design really helps to achieve that.

So I don't ruin the story for anyone, here's the blurb from the back of the first book just to give a flavour: "For Durzo Blint, assassination is an art-and he is the city's most accomplished artist. For Azoth, survival is precarious. Something you never take for granted. As a guild rat, he's grown up in the slums, and learned to judge people quickly - and to take risks. Risks like apprenticing himself to Durzo Blint. But to be accepted, Azoth must turn his back on his old life and embrace a new identity and name. As Kylar Stern, he must learn to navigate the assassins' world of dangerous politics and strange magics - and cultivate a flair for death."

Rather than give a synopsis of the trilogy, I'll try to broadly describe what you can expect to see if you read this series. Given the central character is an assassin it's perhaps unsurprising that there's a fair bit of death! I will mention here what was unexpected from the first book was the darkness in the portrayal of living as a street urchin - not only covering the physical danger that the children were in but also the moral choices that it forces upon them. In this trilogy, you also get some magic, plenty of battles, political intrigue, romance (some of it slightly confusing) and a convincing world to set them all in. You also get a hell of a lot of characters to follow around and I'm not sure that they were all needed in this depth.

That aside, to give a (very brief) summary, I enjoyed the first book, felt the second book dragged a little and just too much happened and the third book brought everything to conclusion whilst also setting up potentially more interesting story arcs for future novels! If you like the magic or fantasy assassin sub-genre and are after an easy read with an interesting take on right and wrong then go for it.

My thanks are due to Fantasy Book Critic for the image of the combined covers as it saved me a job collating them myself!
Posted by Peta at 10:00