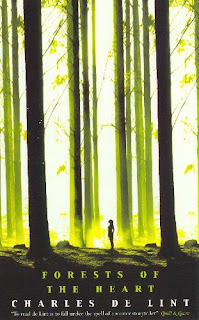 An introduction from the blurb: "In the Old Country, they called them the Gentry: ancient spirits of the land, magical, amoral, and dangerous. When the Irish emigrated to North America, some of the Gentry followed...only to find that the New World already had spirits of its own, called manitou and other such names by the Native tribes.

Now generations have passed, and the Irish have made homes in the new land, but the Gentry still wander homeless on the city streets. Gathering in the city shadows, they bide their time and dream of power. As their dreams grow harder, darker, fiercer, so do the Gentry themselves--appearing, to those with the sight to see them, as hard and dangerous men, invariably dressed in black."

Bettina is a healer who is part Indian and part Mexican and she was raised in the desert by her grandmother to understand the spirit world. Now she lives in Kellygnow, a massive old house run as an arts colony on the outskirts of Newford, a world away from the desert of her youth. She can see the Gentry gathering in the woods near the house and, when she realises that they intends to challenge the local spirits, is instrumental in the fight against them.

The large cast of characters include Ellie, an independent young sculptor, who also also has magic in her blood, and her former lover, Donal, who has Irish roots and a grievance against the world. Donal's sister, Miki, a punk accordion player, works for Hunter, a record shop owner and finally we have Tommy who is a Native American from the reservation nearby and volunteers with Ellie to help the homeless. It all looks so simple there but when they were being introduced (along with several more minor ones) it was getting a bit confusing for me!

This book mixes Celtic and Native American folklore in a modern south western American setting which was somewhat unexpected. I think I expected something more overtly Gaelic but the blend of traditions actually worked quite well. The desert landscape is carefully and lovingly described and Bettina's strong tie to her homeland and the conflicting pulls of Catholicism and Folklore is nicely balanced.

As an introduction to de Lint, I suspect I could have chosen an easier work but as I understand that many of Charles de Lint's novels have been set in and around the city of Newford, I'll have a dig about for more. I also want to see if any of the other books feature Tommy's large selection of formidable aunts who I would have loved reading more about.
Posted by Peta at 17:50