I won Confessions of a Jane Austen Addict

over on Elaine's Random Jottings and was dying to read it last weekend but I'd not finished Waterworld and had to take advantage of the weather and tackle the garden. Before I head off to Kenya, I managed to find time this weekend to squeeze this one in though! 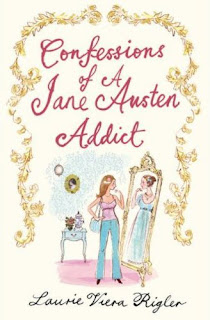 From the blurb: "Courtney Stone - sassy, smart and suddenly single - has always felt she might have been better suited to life in Jane Austen's England. She senses that she would have found soul mates in Emma and Elinor, and through good times and bad S&S and P&P have been her secret under-the-duvet pleasures. One evening, having drifted off to sleep after self-medicating with pizza, Absolut, and Elizabeth and Darcy, Courtney wakes up in nineteenth-century England, in the bed (not to mention the slim and svelte body) of a girl called Jane Mansfield. At first she thinks this has to be some sort of weird dream, but slowly she becomes used to the absence of toothpaste and fat-free food, and finds herself actually enjoying Jane's life. Perhaps she could do without her wicked new 'mother' who wants to marry Jane off as soon as possible to the nearest wealthy man although this may not be such a bad thing, as the nearest wealthy man just happens to be the very dishy Charles Edgeworth. But, in becoming Jane, Courtney has left some important unfinished business behind, and she soon realises that in order to return to the present day she needs not only to solve the riddle of Jane and Charles but to get to grips with her own twenty-first-century relationship phobias along the way. "

My first impressions of this book was that there are distinct shades of last year's wonderful ITV series "Lost in Austen" but it was different enough for it not to matter. Courtney is from Los Angeles rather than the UK and this makes for an even broader cultural divide than in Lost in Austen. I was also pleased that the author made an attempt in this book to ask some of the questions that I had in the series such as those around washing, ladies matters and going to the loo! Never say I'm not high brow!

Overall, an enjoyable read that makes me want to download some more Austen to my iPod Touch and take it with me to read it in Kenya. Although something feels a bit odd about the prospect of reading Jane Austen in Africa.
Posted by Peta at 09:47