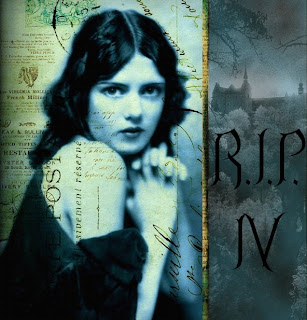 Yay! It's R.eaders I.bibing P.eril time again. Hosted by the lovely Carl from Stainless Steel Droppings, R.I.P IV officially runs from September 1st through October 31st. Covering the genres of "Mystery. Suspense. Thriller. Dark Fantasy. Gothic. Horror. & Supernatural", I'm aiming to complete Peril the First - which is to read four books of any length, from any subgenre of scary stories by the end of October.

It honestly does not feel like a year since I took part in R.I.P. III and I see, slightly to my horror,
that I managed seven books last year! I'm not committing to read that many this time around but I am definitely aiming to read four and I have a few things in mind. Some of which I planned to read in R.I.P. III but didn't quite get around to. Those were:

- Charles Palliser
The Woman in White

I've also saved listening to some audiobooks of the short stories of MR James, Edgar Allan Poe & HP Lovecraft for this challenge and last year, when I read We Have Always Lived in the Castle, I said I would read more of Shirley Jackson's work so I will be hunting out a copy of The Haunting of Hill House too. I'd also really like to get hold of a copy of The House of Leaves by Mark Z. Danielewski but at £20 it's probably going to stay on my wishlist instead :(

Most of all though, I'm looking forward to seeing what other participants read and getting inspiration from them!
Posted by Peta at 07:50