This book counts towards both the Non-Fiction Five and the Graphic Novel Challenges. I think that this might actually make it a Non-Fiction Six but I'm sure that can't hurt! 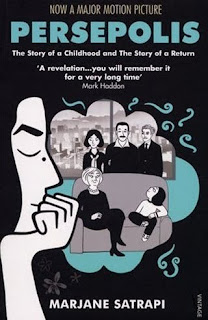 With my recent (rather tardy) joining in with the Graphic Novel challenge, and in a bid to get enough books read to earn my "Minor" badge, it seemed a good time to read Persepolis by Marjane Satrapi. My paperback edition contains both The Story of a Childhood and The Story of a Return.

is an autobiographical graphic novel set in Iran during the Islamic Revolution. At this time, Satrapi is the six-year-old daughter of two Marxists. As she grows up in Tehran she witnesses first-hand the effects that the revolution, and the war with Iraq, have on her home, family, friends and school. The second book in this omnibus covers her adolescence years spent in Vienna as, at the age of 14, her parents sent her out of the country to keep her safe and then finally her return to attend college in Iran which takes us up to her mid-twenties.

Like Maus, which I read earlier this year, the story is told using deceptively simplistic black and white images however this does not mean that the story is a simple one. It's a very personal, and honest, account of a girl growing up in very difficult circumstances. Satrapi uses a very dark sense of humour to skirt a fine line between comedy and tragedy which works effectively in allowing her to tell her personal story as well as recount some pretty horrific events happening around her. The contradiction between public and private life in Tehran lent itself well to depiction by illustration and the nuances of rebellion, whilst her and her friends were ostensibly conforming in dress and behaviour, were fascinating.

I think that condensing the book to standard paperback size, as in my edition, was a shame as sometimes the text was a bit hard to read and the layout felt compromised. Having said that, I still enjoyed it and I think I have been incredibly lucky to have read three such good examples of non-fiction graphic novels this year. I've also tracked down an excerpt which gives a good sense of what to expect from this book.
Posted by Peta at 18:56

I saw about 20 minutes of the film a while ago. It was a bit too late at night for me to watch the whole thing, but I really regretted having to go to bed (blast having a job). The graphical style seems so unique, can't wait to try the book.

Silly jobs - always getting in the way of good things! It's well worth giving the book a go especially if you're already "warmed up" by seeing a bit of the film version.

I haven't read the book, but I loved the film. Particularly given recent events in Iran.