Dreams From My Father - Barack Obama

This is my fourth Non-Fiction Five read.

I was lucky enough to see Simon Scharma speak about his newest book The American Future at the UEA as part of their last literary festival and he urged the audience to read this book by Barack Obama saying that it was beautifully written. Being an obedient little soul I ordered myself a copy straight away! 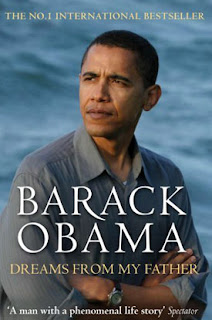 Dreams from My Father

, sub-titled "A Story of Race and Inheritance", was commissioned following Barack Obama's election as the first African-American president of the "Harvard Law Review" and I would strongly suspect that this book was not at all what the publisher expected to receive. It is, in essence, a very honest personal memoir of his life up to his entry to Harvard to study law. Perhaps surprisingly given why it was commissioned, it doesn't actually cover his time at Harvard and that's only briefly touched upon in the epilogue.

The book is divided into three sections. "Origins" covers his childhood, adolescence and college years. In "Chicago" he reflects on his experience after accepting a challenging position as a community organiser in Chicago. The last section, "Kenya", (which is the one I found most interesting) is about a month long trip that he took to Kenya to visit his, now deceased, Father's extended family before starting to study law at Harvard. Each section covers his increasing awareness of his own confused identity as a child of mixed race in modern America and gives an absolutely fascinating insight into the journey he takes to try to understand himself and his place in the world.

I knew that Obama's background was unusual but had no idea how much so until reading this book. His maternal Grandparents lived in Kansas before eventually moving to Hawaii, along with their daughter. It was there that she met his Father, a Kenyan studying locally, and you have to wonder just how willing two white Kansas ex- farming stock were to accept their daughter's marriage to a black Kenyan student. Following the collapse of his parent's marriage, she re-married and moved her family out to the Philippines and it's clear that this was quite a culture shock for them both although the young Barack seems to have adapted more successfully than his mother. It was really during the last section of the book where he meets his extended paternal family that I realised just how different the two worlds that his parents inhabited actually were and that whole experience must have been quite something for a young guy in search of his heritage.

The young Obama is eloquent and perceptive - I wish my younger self had displayed even half of the empathy and thoughtfulness that this young man does. Barack Obama is very honest about his thoughts and experiences in this book and I wonder if he'd write the same story if documenting his early years now. It's this very openness, and willing to share, that makes the book special and, completely setting aside who he became, it remains a very well written, thought provoking and moving account of a young man coming to terms with his heritage and finding his place in the world.

My next non-fiction read is Simon Scharma's The American Future which will hopefully be an excellent choice of book to read straight after this one.
Posted by Peta at 07:50

This was the first book I read this year. Having knocked on many doors in Virginia trying to help him get elected, I thought it would be a good idea to have a better understanding of his past.

So many politicians in this country "write" books when they are running for high office. It was so nice to read one that wasn't a political manifesto, was well-written, and would be interesting to read even if he wasn't as well known as he is.

I think you've really hit the nail on the head and summarised what really appealed about this book. It's clearly not written for political posturing and it is successfully a well written, and interesting, book without the added frisson of the author going on to become famous. Highly recommended!