J is for Jokes! 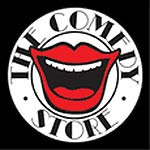 Thinking of a J alphabet weekend activity was surprisingly hard especially as I was slightly hampered by our pre-existing weekend commitments. Jazz - no events this weekend. Jousting - unable to work out how to arrange this in Norfolk. Jelly - a bit lame. Learning the Jitterbug - no teacher with availability in the tight time slot I had. Eventually inspiration hit and I decided to try for Jokes and victory was mine!

Having "accidentally" slipped up and revealing, via email, that we were off to a Jam Making course being run by the local branch of the Women's Institute last night, Mr B was extremely relieved to discover, when he met me in Norwich after work, that I had in fact bought tickets to the Comedy Store's mini-festival being held at the Unthank Arms instead. Good of him to turn up to be honest as he was reasonably confident that his wife was random enough to have actually booked a jam making session.

We had dinner before heading up to the pub and I succeeded in getting the start time completely wrong so as we sneaked into the marquee that the pub had erected in the garden, the MC took the opportunity to make several jokes about women making men late. Aided by Mr B's supportive palming all blame off on me... The overall line up was very strong and the second comedian, Mike Gunn, was very funny indeed although I suspect you really had to be there!

(PS - inexplicably I failed to post this last week having written the whole thing! Weird)
Posted by Peta at 07:51