is an almost unclassifiable debut novel by Nick Harkaway and, before I go too much further I feel that I should mention that it's a belter. 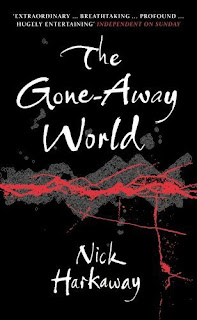 From the blurb: "The Jorgmund Pipe is the backbone of the world, and it's on fire. Gonzo Lubitsch, professional hero and troubleshooter, is hired to put it out - but there's more to the fire, and the Pipe itself, than meets the eye. The job will take Gonzo and his best friend, our narrator, back to their own beginnings and into the dark heart of the Jorgmund Company itself. Equal parts raucous adventure, comic odyssey and Romantic Epic, "The Gone-Away World" is a story of - among other things - love and loss; of ninjas, pirates, politics; of curious heroism in strange and dangerous places; and, of a friendship stretched beyond its limits. But it also the story of a world, not unlike our own, in desperate need of heroes - however unlikely they may seem."

This is hugely ambitious and epic novel that is sheer pleasure to read and I honestly don’t think that you need be a fan of the Science Fiction genre to enjoy the almost geeky exuberance of the plot.

I approached this book with absolutely no understanding of the sheer scale of what Harkaway was looking to achieve – and that’s possibly just as well as, looking back, it’s a dauntingly sprawling book to get into! I hasten to add that it didn’t feel like that at the time however a hell of a lot of ground is covered in this book and it’s to Nick Harkaway’s credit that this is the case. I should also warn that he also has no qualms about abruptly changing direction and after a thrilling first chapter, which genuinely had me gripped, we’re ripped back in time to the very beginning and it takes around half the book to make our way back to see what happens!

Set in a in a future where the remnants of humanity are struggling to survive, the story is told from the viewpoint of an anonymous narrator who, together with his childhood best friend, end up forming part of a group of talented mercenaries. Quite how Harkaway also manages to plausibly cram into this grim post-apocalyptic world pirates, ninjas, and a troupe of mimes is beyond me!

What makes the book so enjoyable is a great combination of exuberant silliness and daring boys own style adventuring. Chuck into the mix some romance, a great cast of characters and a thrilling storyline and it’s a winner.

He’s a talented author who has hopefully not used up all his ideas in his first book – as I’m already looking forward to reading his second. Which I don’t think he’s actually written yet!

If you want to learn more about him, he has a blog and is also to be found lurking over on twitter.

I keep seeing this book at the library under New Arrivals, but too many other books have distracted me from reaching out for this one. But on my next library trek, I'll definitely look out for it!

Glad to hear that and I hope you enjoy it as much as I did!