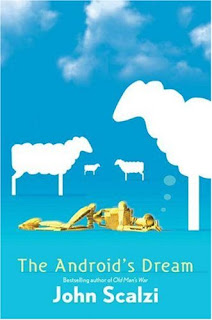 by John Scalzi is the first of his books I have read that's outside his "Old Man's War" universe which I really enjoyed "discovering" last year. It's a comedy that reminded me slightly of a hybrid Tom Holt/Tom Sharpe or even Douglas Adams but still remains convincingly rooted in a future where Earth is finding its feet as a minor galactic power.

And on to the plot: "A human diplomat kills his alien counterpart. Earth is on the verge of war with a vastly superior alien race. A lone man races against time and a host of enemies to find the one object that can save our planet and our people from alien enslavement... A sheep.
For Harry Creek, it's quickly becoming a nightmare. All he wants is to do his uncomplicated mid-level diplomatic job with Earth's State Department. But his past training and skills get him tapped to save the planet--and to protect pet store owner Robin Baker, whose own past holds the key to the whereabouts of that lost sheep."

This is not a serious book which is clear from the outset as it opens with what is essentially a lengthy fart gag. The character of Harry Creek is very likable and he's both clever and capable so good hero material. It's clearly aimed to entertain its audience and it certainly achieved that as at its heart it is a nicely paced and straightforward adventure novel - just one set in the future with inter-galactic politics replacing the cold war!

For a free taster of what you might expect, here's an excerpt from Chapter 1.
Posted by Peta at 19:32